California just started the clock on a future that a few years ago would’ve been unthinkable: dealerships full of nothing but zero-emissions cars.

On Wednesday, Governor Gavin Newsom ordered regulators to phase out the internal combustion engine and ban the sale of all new gasoline-fueled cars after 2035. With that, California became the first state in America to impose such a prohibition and delivered the biggest jolt yet to automakers already under pressure to give up fossil fuels and deliver a new generation of electric vehicles.

The Golden State makes up about 15% of U.S. gasoline sales 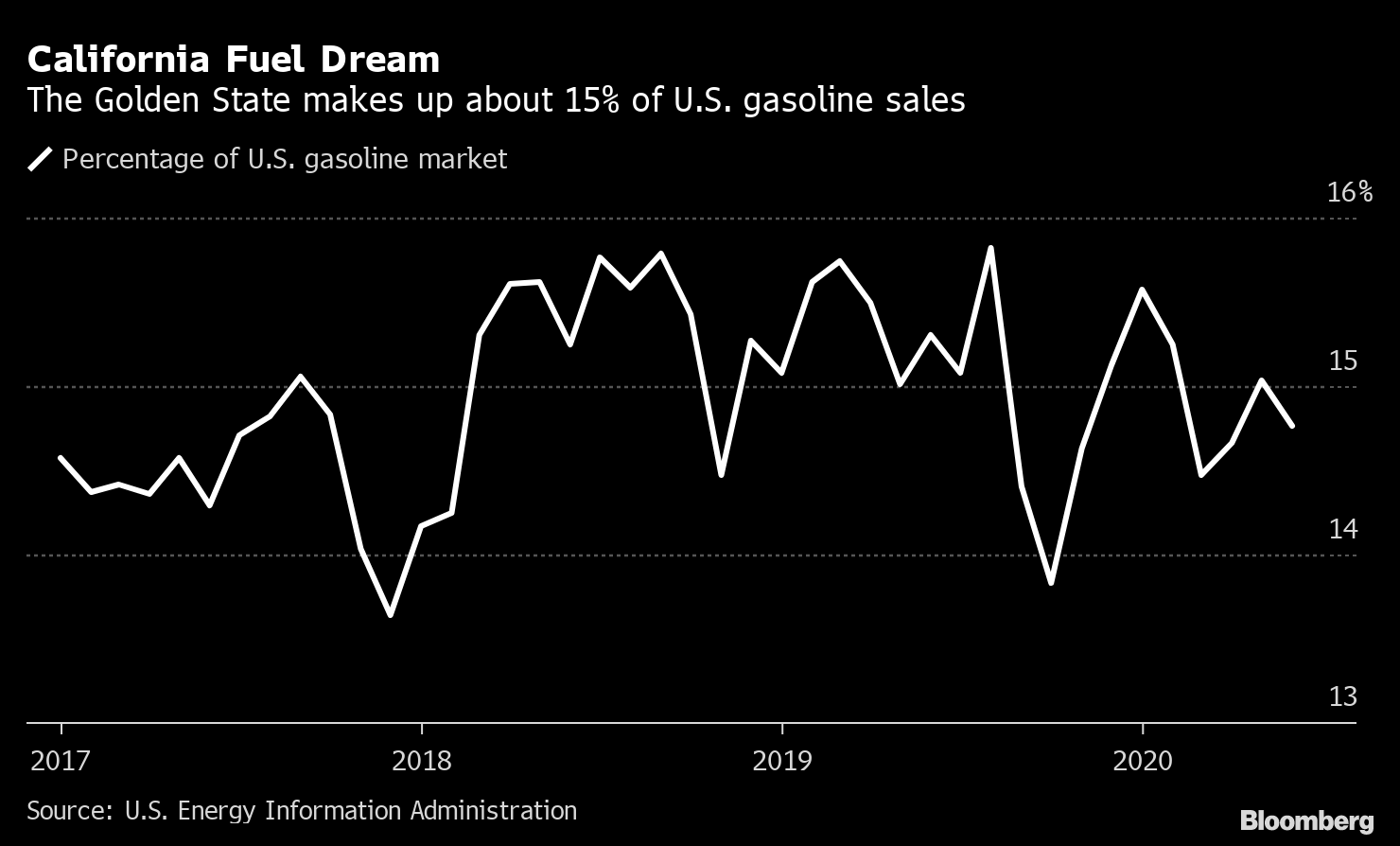 While for now the industry depends on gasoline-powered SUVs and pickups for most of its profit, traditional automakers are investing billions of dollars in electrification and announcing new EV models — with startups such as Rivian Automotive and Lucid Motors Inc. right on their heels. California’s ban ups the ante.

“There’s an arms race going on here,” said Mary Nichols, chair of the powerful California Air Resources Board that regulates the emissions of everything from oil refineries to power plants to cars.

Newsom’s announcement adds to worldwide momentum this week in the fight against climate change, coming less than a day after China pledged to go carbon neutral by 2060 — a bold move from the world’s largest polluter that, while still 40 years out, caught environmentalists by surprise. California is joining more than a dozen countries, including the U.K., France and Canada, that are phasing out the internal combustion engine, BloombergNEF data show. The U.K. is actually considering whether to push forward its ban to 2035.

What California wants would be a huge leap for the auto industry. Less than 8% of new vehicles registered in California through the first half of the year were electric ones. And in 2035, BNEF projects about half of U.S. passenger vehicle sales will be battery and plug-in hybrid electric vehicles in 2035.

The target is “aggressive,” but it has the potential to speed the pace of EV adoption among automakers, said Stephanie Brinley, a principal automotive analyst for IHS Markit.

“If it actually happens, it does create a reason and impetus to make change happen faster,” Brinley said. If “you have the opportunity for volume there, and you’re going to be able to sell the car, then you can put more money into investing and increasing your capacity faster.”

Read More: So You Decided on an Electric Car. Now What?

Newsom’s order — signed on the hood of the forthcoming electric Ford Mustang Mach-E — will inevitably set the tone for states across America. Not only is California the largest car market in the U.S., it’s also one of the nation’s biggest gasoline consumers and the world’s second-largest EV market, behind only China. The strength of its transportation policy has always hinged on the fact that automakers, other like-minded states and often the nation have tended to follow suit.

The ban is “a kiss of death for gasoline and petroleum as California tends to be a trendsetter,” said Patrick DeHaan, head of petroleum analysis for fuel-pricing firm GasBuddy.

CA is phasing out the internal combustion engine.⁰
By 2035 every new car sold in CA will be an emission free vehicle.

Cars shouldn’t give our kids asthma.

Key questions remain, including whether California will allow plug-in hybrid sales (used gasoline car sales will be allowed) — and whether the rest of the U.S. will actually join. Much of the latter hinges on the upcoming presidential election. While the Trump administration has aggressively fought California’s efforts to squeeze emissions out of transportation, Democratic presidential nominee Joe Biden has advocated for the widespread adoption of electric cars and a national charging network to power them.

There is also the question of enforcement: Combustion engine phase-outs in other parts of the world have lacked the necessary teeth to be effective, such as penalties for dealerships who break the rules and sell gasoline-fueled cars. Newsom’s executive order doesn’t lay out exactly how California will see to it that only zero-emissions cars are eventually sold. 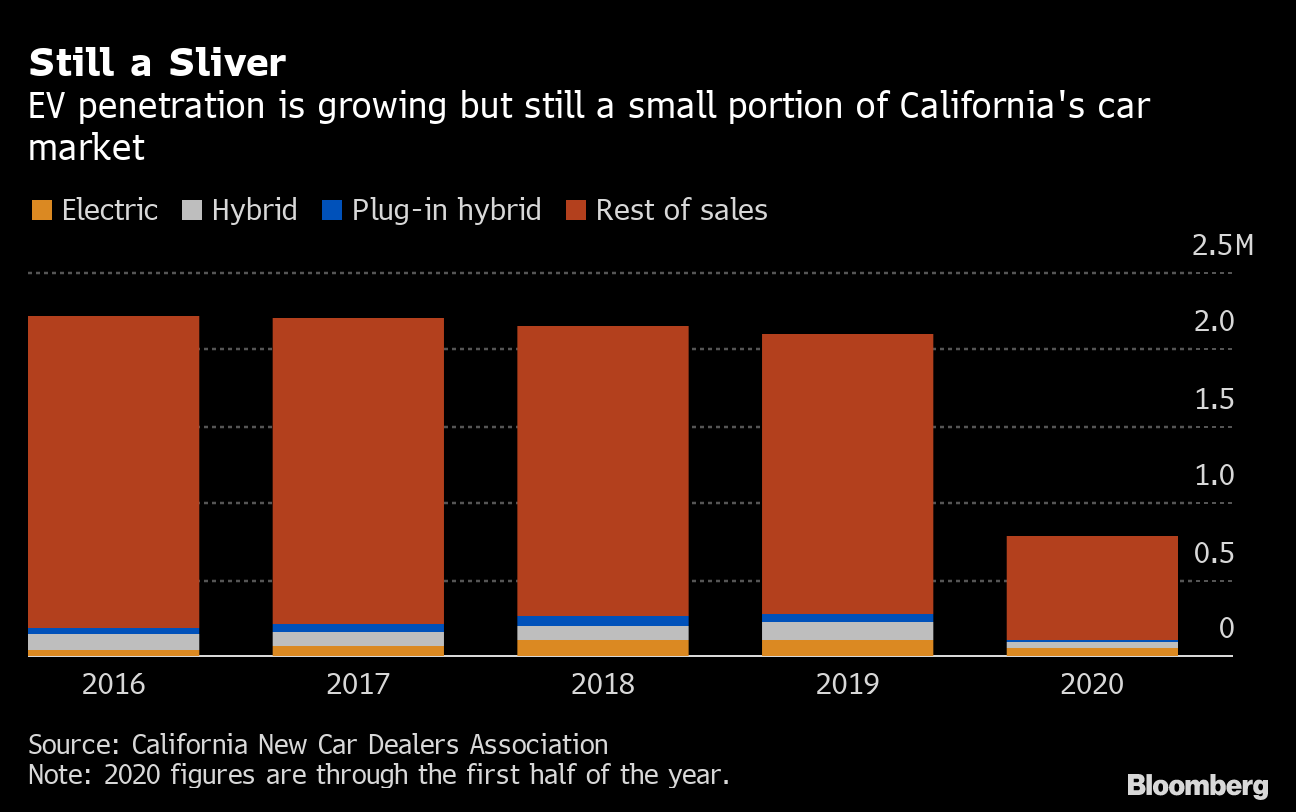 Still, the Golden State has long been a champion of hybrid and electric cars powered by batteries and fuel cells, with aggressive targets that have pushed and prodded automakers to comply. Its zero-emissions vehicle, or ZEV, program requires automakers to sell electric cars and trucks and has been adopted by several states including New York, New Jersey and Oregon.

The ZEV regulation has allowed home-grown companies like Palo Alto-based Tesla Inc. to earn revenue selling emission credits to automakers who can’t meet the mandate. And while 2035 has long been a goal for California to reach zero emissions, Newsom is doubling down on that time line as the state confronts the grim consequences of climate change: heat waves and massive wildfires that have scorched millions of acres and choked much of the West Coast with toxic air pollution.

Ford is proud to be the only American automaker to stand with California for reduced greenhouse gas emissions. We want to leave a better world to the next generation: pic.twitter.com/9I27AO47Yq

The 2035 deadline “gives everyone who works in transportation — including the fuel suppliers, planners, manufacturers and fleet managers — a real target to work towards,” Nichols said.

Anyone who thinks Newsom’s goal is symbolic, only cementing where California was already headed, is mistaken, said BloombergNEF analyst Nick Albanese. “Despite its ambitious policies, I do not think California was on track to hit a 100% passenger EV sales share in 2035 before this announcement,” he said.

Nichols said that the next 15 years will be ones of transition, as automakers put forward more cars, consumers become more comfortable driving electric and the cost of batteries drops. Tesla’s “Battery Day” on Tuesday didn’t go unnoticed in Sacramento. Nichols noted the electric carmaker’s plan to halve the cost of batteries and, consequently, build EVs that more people can afford to buy.

“It’s an electric race to get to cheaper and more effective batteries, and it’s one that manufacturers around the world are competing in,” Nichols said. “That’s the prize: the zero-emission vehicle that’s affordable to everybody.”

Not everyone is happy. Questions remain about charging infrastructure, and how low-income consumers will be able to afford electric vehicles that are largely associated with coastal wealth. Roughly 2 million new passenger cars and light-duty vehicles are sold in California each year, and the California New Car Dealers Association has several questions about how the directive will be met.

“Banning new non-ZEV vehicles and limiting choice, even 15 years from now, is significantly more difficult than striving to achieve the goals the governor has set forth,” Brian Maas, of the CNCDA, said by email. “While we support the state’s goals to combat climate change, there are many questions and factors that need to be thoughtfully considered.”

Newsom’s executive order tasks Nichols’s agency with writing the regulations. There may be some some wiggle room in how automakers can achieve the state’s goal. In the past, the air board has made changes when it was clear the market and the technology couldn’t match the rules.

“There’s still some things to figure out, but it’s a significant direction to lay down,” Brinley said.

— With assistance by Jeffrey Bair, Michael Jeffers, and Kara Wetzel

Before it’s here, it’s on the Bloomberg Terminal.